Transpersonal means beyond the personality.

Recognition of the transpersonal in our nature has a long lineage.  The 14th Century Florentine, Dante, mapped our discovery path in his world literary masterpiece, The Divine Comedy.  The founder of modern nursing, Florence Nightingale, referred to us in her Notes on Nursing as “reflections of the Divine with our physical, metaphysical and intellectual attributes.” The “father” of American psychology, William James at Harvard, described potential states of consciousness just beyond our ordinary perceptions in his classic work, Varieties of Religious Experience.  The Florentine neurologist and psychiatrist, Roberto Assagioli, developed an entire system, psychosynthesis, to help us to open our personalities to our transpersonal nature.  The latest neuroscience and its discoveries of the “higher brain” and states of oneness and absolute unitary being bring physiological data to the transpersonal developmental process.

Clinically, drawing on psychosynthesis, the practices of Transpersonal Development were first applied by Bonney and Richard Schaub in the late 1970s to deepen the recovery process of people in 12-Step programs.   The practices were then taught to professionals at drug and alcohol treatment centers.  Transpersonal Development has since been expanded by the Schaubs and their colleagues to many others issues, including trauma reduction, anxiety reduction, creative growth, executive coaching, and young adult self-esteem.

The development has three broad stages:

1. Moving from Fear to Choice is the study of innate human vulnerability.  This stage is based on three insights:

The two answers in our vulnerability:

2. The Opening of the Personality is a set of safe, effective, time-tested clinical meditation and imagery (CMI) practices to discover the part of our nature that is deeper than our personality, including the qualities of inner peace, inner wisdom, life purpose and oneness.  The practices engage three natural resources that already exist in each person – awareness, imagination, energy – with supportive roots in psychosynthesis, mindfulness, visualization, qigong, energy medicine and the latest neuroscience.

3. Moving from Separateness to Oneness is the advanced practice of CMI so that each person discovers their own best way to experience their transpersonal nature and the joy, bliss and oneness that comes with it.   All practices are ultimately oriented toward this discovery.

The model of development builds on and adds to the visionary work of the Florentine neurologist and psychiatrist, Roberto Assagioli (1888-1974).

It is interesting to follow the work of such a visionary. As early as 1910, Assagioli  saw the need for psychology to include the innate spiritual aspect of human nature: he chose the term psychosynthesis to emphasize the interactive effects of psychological and spiritual development.  Later on in his work, he said that the term transpersonal may be a better word than spiritual for health professionals to use since it is more neutral.  Assagioli, along with Carl Jung, is considered to be the pioneer of  transpersonal psychology. From a health perspective, he saw that transpersonal/spiritual discoveries bring breakthrough understandings and new courage to face the essential vulnerability and difficulties of life.  As a result, health professionals, creative- and spiritually-minded people of every background and clergy of every faith have sought out psychosynthesis-trained professionals.

Assagioli’s work sprang from both the scientific study of the human mind and the long mystical traditions of both East and West. Perhaps his single greatest influence was Dante (1265-1321), a fellow Florentine who described the steps of the Western spiritual journey in his world literary masterpiece, The Divine Comedy, which has had more books written about it than any other book in history except for the Bible.

The special feature of psychosynthesis is that it recognizes the need to balance the three primary desires in our nature – biological survival, social belonging, spiritual realization. A 100 years ahead of his time, Assagioli included many forms of meditation, imagery, visualization and energy work in his medical and psychological practices. Professionals in psychotherapy, nursing, medicine, counseling, psychiatry, psychology, pastoral care, social work, chiropractic, body work, coaching and other helping fields have integrated Assagioli’s work into their outlook and skills.

“Spiritual realization is the direct personal experience of the aspect of your nature that is identical to the energy pervading the universe.”

Roberto Grego was born in 1888 in the Jewish ghetto in Venice, Italy. His father died when he was two, and his mother remarried a Dr. Assagioli. Young Roberto took his step-father’s last name and, by the age of seventeen, was enrolled in medical school in Florence. Upon graduation, he studied the then new form of psychotherapy, psychoanalysis, corresponded with Sigmund Freud, trained at Burghölzli with Eugen Bleuler, received supervision from Carl Jung and was one of the founding members of the International Psychoanalytical Association.  His own experiences with meditation and mental imagery, originally taught to him by his mother, motivated him to develop an integration of these inner spiritual skills into psychotherapy. 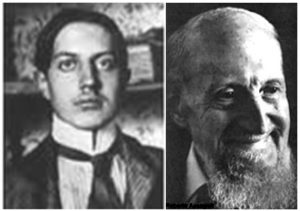 The young doctor (L) The last year of life (R)

He served as a doctor in the Italian army in World War One. Upon the return to peacetime, Assagioli felt ready to begin to teach a synthesis of psychotherapy and meditation – psychosynthesis psychology – and opened his first training institute in 1926. At the start of World War Two in Europe in 1938, he was arrested for being a Jew by the Italian Fascist police and was put in solitary confinement. In his cell, he meditated for hours every day and declared he had achieved freedom from circumstances: “A sense of boundlessness, of no separation from all that is. A sense of universal love. A wonderful merging. No separation – only differing aspects of wonder…Essential Reality is so far above all mental conceptions. It is inexpressible. It has to be lived. Joy inherent in Life Itself, in the very Substance of Reality.” (Strikingly, the latest neuroscience refers to such an experience as absolute unitary being when the higher region of the brain is awakened by meditation and other practices.)

His prison enlightenment led him to vow that, if he ever got out, he would “help to free people from their inner prisons.” Later released, but under police surveillance, he eventually had to hide in the Tuscan hills with his only child. The boy, Ilario, contracted tuberculosis, and Assagioli desperately tried to bring him across the border into Switzerland to get treatment. His letters asking, unsuccessfully, for help from his Swiss colleague, Carl Jung, are heartbreaking. His son died soon after the war was over. His wife and he were reunited and settled in Florence where their house became by 1950 a psychosynthesis training institute. A visit to Assagioli’s library shows that he read many books on loss and grief and underlined and folded key passages to refer to for help.

He was clear that psychosynthesis was not a movement to be promoted but a process to be learned and practiced inside each person. Taught at training institutes throughout the world, one of the four forms of psychotherapy approved by the European Union, and a graduate degree specialty at English universities, our goal is to extend the awareness and use of Assagioli’s visionary work. 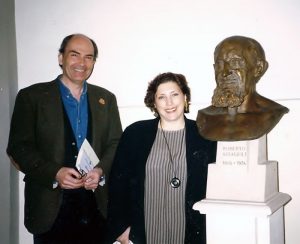 Please be in touch with Dr. Richard Schaub with any questions: drrichardschaub@gmail.com

About Us
Huntington Meditation and Imagery Center offers a pragmatic, scientific approach to teaching the many benefits of a calm, focused mind and body to individuals, couples, groups, and organizations
Contact Us
Visit Florence Press
Visit New York Psychosynthesis Institute
Programs We Offer

Please complete the form to learn more about any of our programs. We'll be in touch within 24-48 hours.